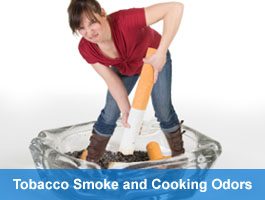 The majority of cigarette smoke problems we fix are in private homes and vehicles. We are contracted by car dealerships, realtors and property management companies and have eliminated tobacco smoke smell from hundreds of vehicles and homes,so you can be sure that our solution works.

The combination of Odor Medicine SFF, our proven processesm and free consulting results in permanent tobacco smoke odor elimination in the shortest time and at the lowest cost.

Fixing years of nicotine contamination is not a trivial task. Nicotine builds up in layers and attaches to every surface including the furniture, drapes, carpet, clothes, and can even penetrate into the ducts of a forced air HVAC system. The more porous the surface, the more nicotine will be present.

We have also fixed numerous cooking odor problems, especially those caused by cooking with spices such as curry. Permanently eliminating cooking odors is difficult because the contamination is insidious and has the potential to affect every surface in a home. Just like cigarette smoke, it also gets into the ducts of a forced air HVAC system so it's very important to have a plan tailored to your specific problem.

Let us prove it to you! We guarantee permanent odor elimination or your money back!* (*Learn more about the Odor Medic guarantee)

This product hasn't received any reviews yet. Be the first to review this product!