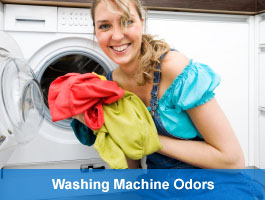 The Problem: Removing Mildew Odor from Your Front-load Washing Machine

Getting rid of mildew odor from smelly washers is one of the most common problems that we're asked about. The smell is insidious and can affect everything you wash. If you've ever had to throw out a favorite piece of clothing due to this smell... keep reading!

Mildew smell in washing machines is caused by the water not getting completely pumped out of the machine--therefore being left to sit in the tub and front seals. Eventually, a mildew-type scum develops that causes the offensive odor in the machine and your washables. This problem is common to all brands of front-load washing machines because they're all of similar design.

Odor Medicine S.W.F will eliminate the mildew odor from your washing machine and, going one step further than competitive products, can also be used to eliminate the smell from other items that have picked up the odor. It is safe to use in your washer because it's non-toxic, non-staining, biodegradable and has a neutral pH.

Let us prove it to you! Save your washing machine at a fraction of the cost to replace it or your money back!

We don’t cover up odors, we permanently eliminate them.